Tactical Brunch is made up of two aluminum cases, which allow me to make brunch “in 7 minutes”. 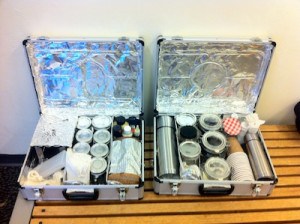 The first case allowed me to make hot, open faced sandwiches. Sandwiches were all made with whole grain bread, and toasted on a collapsible grill heated by Sterno. (Sterno allowed for an easy to control heat source with minimal mess.)

I was able to serve three sorts of sandwiches:

I was able to make two sandwiches at a time, as my grill could toast that amount of slices at a time.

The other case was for making cappuccinos. It held two thermoses of hot water, an aeropress outfitted with a reusable steel filter, coffee, skim milk powder, a frother, cups and sugar, as well as an assortment of teas. There was also a container of fresh lavender for those who wanted to smell their aroma…

The cases themselves were modified tool cases. They cases were stripped down to their walls, lined with aluminum. This allowed for the cases to be more fire proof, easier to clean and overall added to the look of the project. Custom partitions were also added to each case, reducing the amount of shifting of the items in the trunk during transit.

As Maker Faire ran from around 10 AM – 6 PM, I also had a prep area where I was able to restock, boil water and prep the eggs, tomatoes and bananas before I went out.

Once the cases were ready to go, I wondered through the faire, looking for Maker’s who were at their booth and looked like they could use a pick-me-up. If you have never worked at an event like this, you may not realize that the people exhibiting get trapped at their booths, unable to get away for a quick break. Also, with food lines that stretched for over an hour in some cases, it was hard to get a bite.

Once I found someone who looked like they needed a little brunch, I would swoop in, set up and deliver!

A bit of the backstory about Tactical Brunch. At Maker Faire, I’ve done my Noodle Truck the last couple years. Which has been great. But, I wanted to change things up. First off, the Noodle Truck is A LOT of work and requires a big crew. I was interested in seeing how I would do as a one man show.

Also, one of the other big problems I had with the Noodle Truck at Maker Faire is that people get stranded at their booth. Walking away is not really an option. My idea was to bring the solution where people needed it. Plus, I wanted to see the festival!

The first dry run was a few weeks before Maker Faire at the Laboratory Party. While I was just a guest, I still thought it would be fun to bring something. And it allowed me a chance to have a bit of real world experience. All in all, I think it was a successful beta!