I’ve met some intriguing people, who have asked the equivalent of “next time you do an interesting project, let me know”.

While I always want to bring people along for cool stuff, not knowing how someone may react when things get weird sometimes keeps me from bringing them along. But, having new people is fun!

So, I decided to do a project just for them.

On Wednesday Aug 21 – at 9 PM , we met on the bridge over train tracks at the end of dead end street, with a great view of the city. People were asked to dress “fancy for you, but also be okay with the possibility to get dirty”. They were asked to bring one thing: a small prop or a tool that they use or something you think would be fun to show to a stranger, but something they can easily carry. The idea was first we’d improvise something with all of the props that we brought. Then we’d go and break into a bank vault. (Yes, really. (I mean, sort of.))

First two guests in black came down the street, then two guests in white from across the bridge. Eventually we were about 10 people on the bridge. Everyone went around and said their name, and told what their prop was.  Then brainstorming began: how would we knit the props together. Then the person with the cat puppet showed up. And it all clicked into place.

Here’s what happened: Two beautiful ladies went to the subway entrance. The rest of us set up a talk show / puppet show mid-block on an industrial street. I started making coffee out of my case, two people set up a large piece of paper as our backdrop, someone else started taking instant photos, another person started writing out prompts and notes on post-its, two people were acting as our interviewers, another was handling lighting.

And oddly, (or maybe not so oddly based on our recruiters) we suddenly had several gentlemen talking with puppets and drinking coffee.

After about an hour, we were whisked away to break in to the bank vault.

We arrived at an office building in Long Island City, we knocked on a chained door, and two people emerged from inside and rushed us inside, and led us down to a dark basement. And there was the vault, with the door ajar, light coming from the inside. The door swung aside, and a casino had been set up: black jack, roulette and dice. Yes, we were going to play games of chance with fake money in an old bank vault. Snacks were in the anteroom. (I had set up the casino and arranged for the refreshments the day before, with some helpers.)

After an hour, it was time to clean up and go. To keep everyone entertained, we had 3 round challenges. First, I asked what someone can do better than anyone else? Someone said they can tell stories better than anyone else. So we had a 3 sentence story battle. And the challenger won! Then the challenger got to pick the category. This time it was sculpture, and a new challenger came forward.  The medium: pretzels. Challenger won agian! Then the category was pulling together words nicely, with the limits being 4 words. This time, the incumbent won! But then it was time to go…

Everyone left with a hand stamp medal, inscribed with the name of the event, made by one of the participants. I know for me, it is a prized possession.

A few things I learned:

– Small and semi-unstructured is a great way for people to hang out. I’d love to do more events like this. I actually think many a networking event could benefit from an approach like this.

– Curating personalities is incredibly important. I purposely chose people who did not know each other, so there would be no social hierarchy. I also made sure that everyone was collaborative and responsible, and all the people who had strong “alpha” qualities were all female. I did this so no one person would hijack the group, or want to take things in a direction not everyone wanted to go. Having a bunch of mellow, creative, activated people who wanted to succeed as a group created a buzzing energy that everyone was able to contribute and dip into and feel energized by.

– Keeping things moving, and ending things while they were still going nicely kept everyone in their prime.

– Having some easily transportable props – a case I can make coffee out of, a small casino set up – means that I can quickly and easily create complex environments , and to great effect.

A HUGE thank you to the holocenter for letting us use their bank vault. It is great to have good friends who are willing to share what they have!

Here are some instant camera photos of the night: 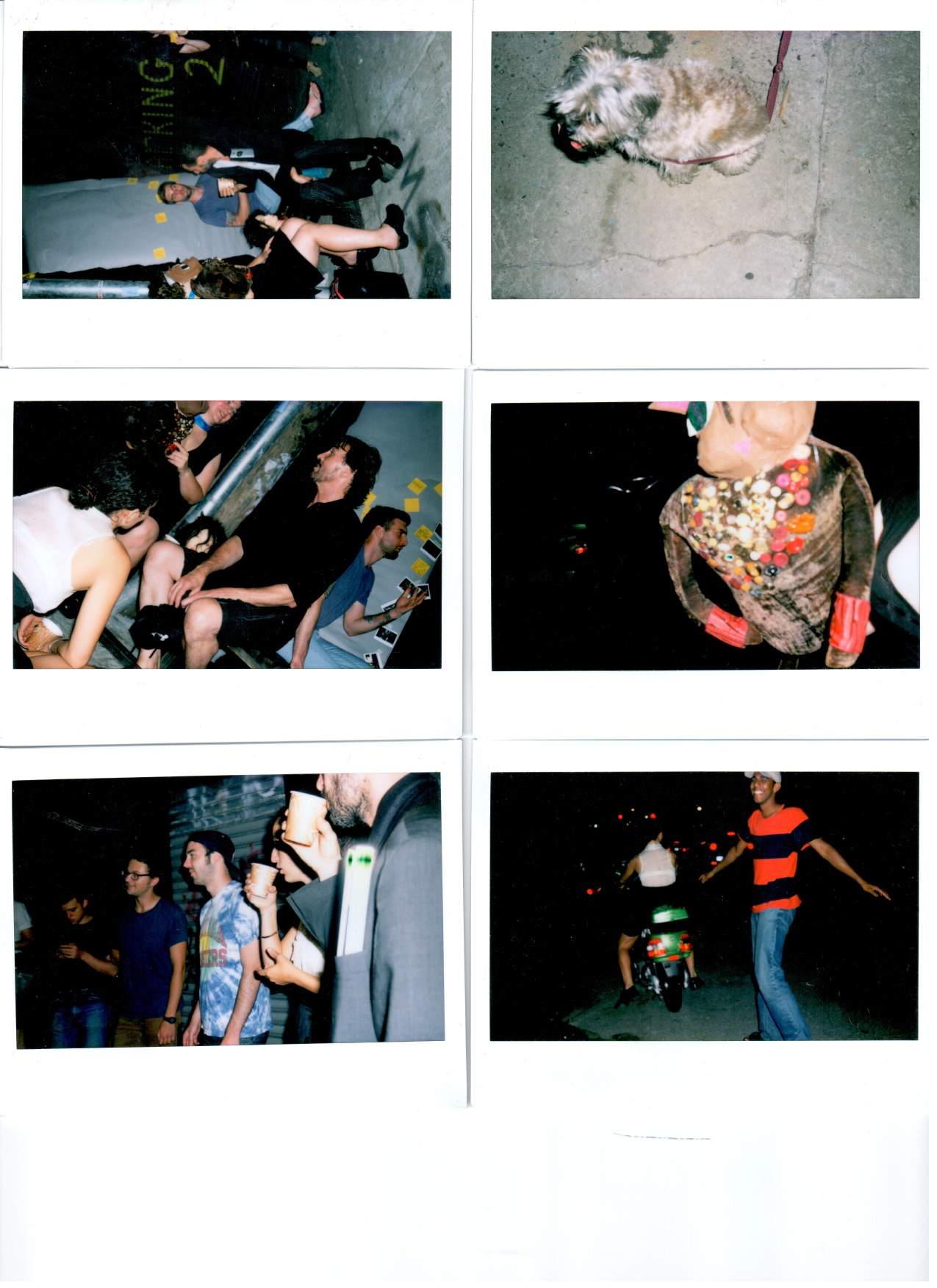 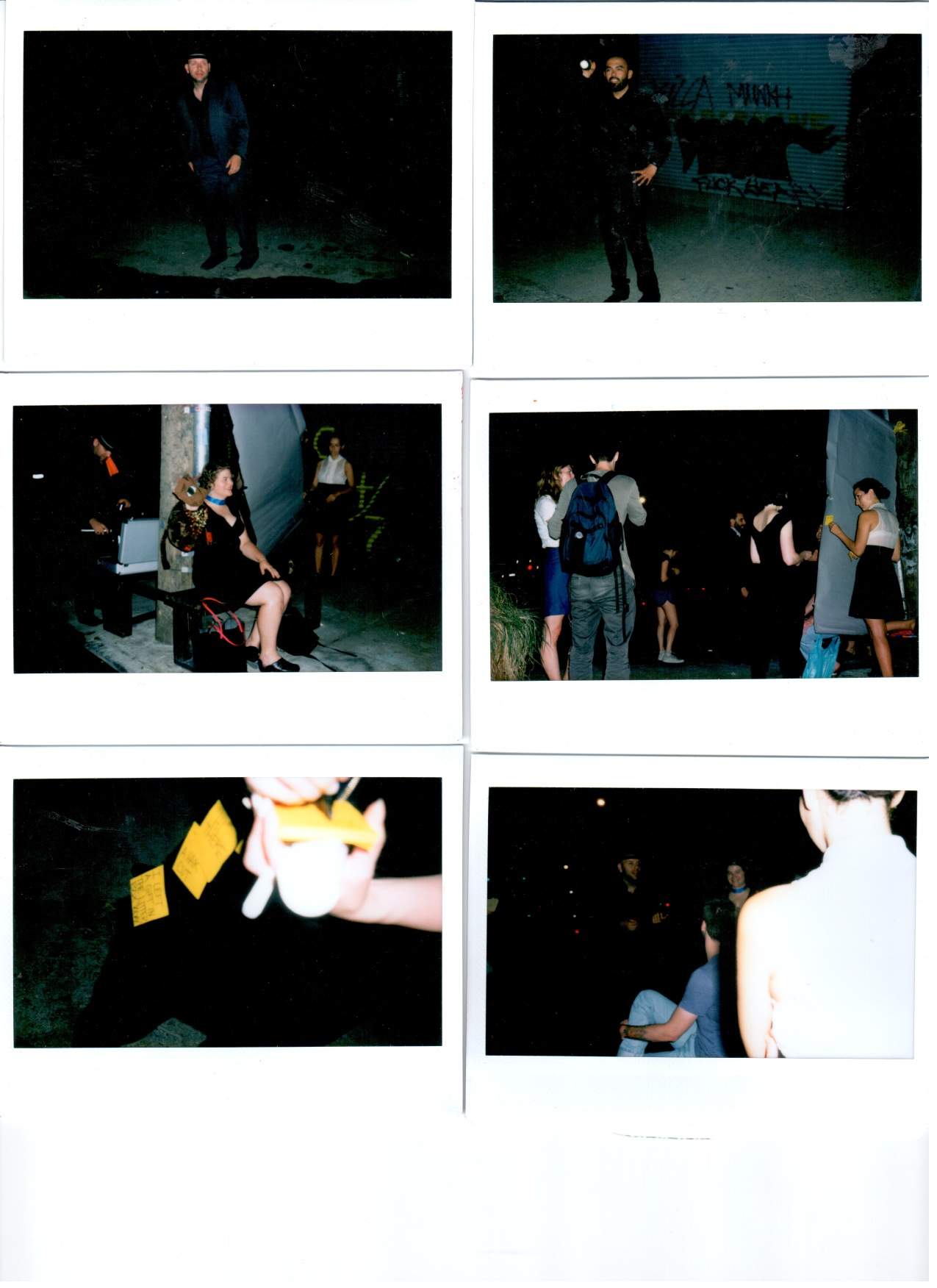 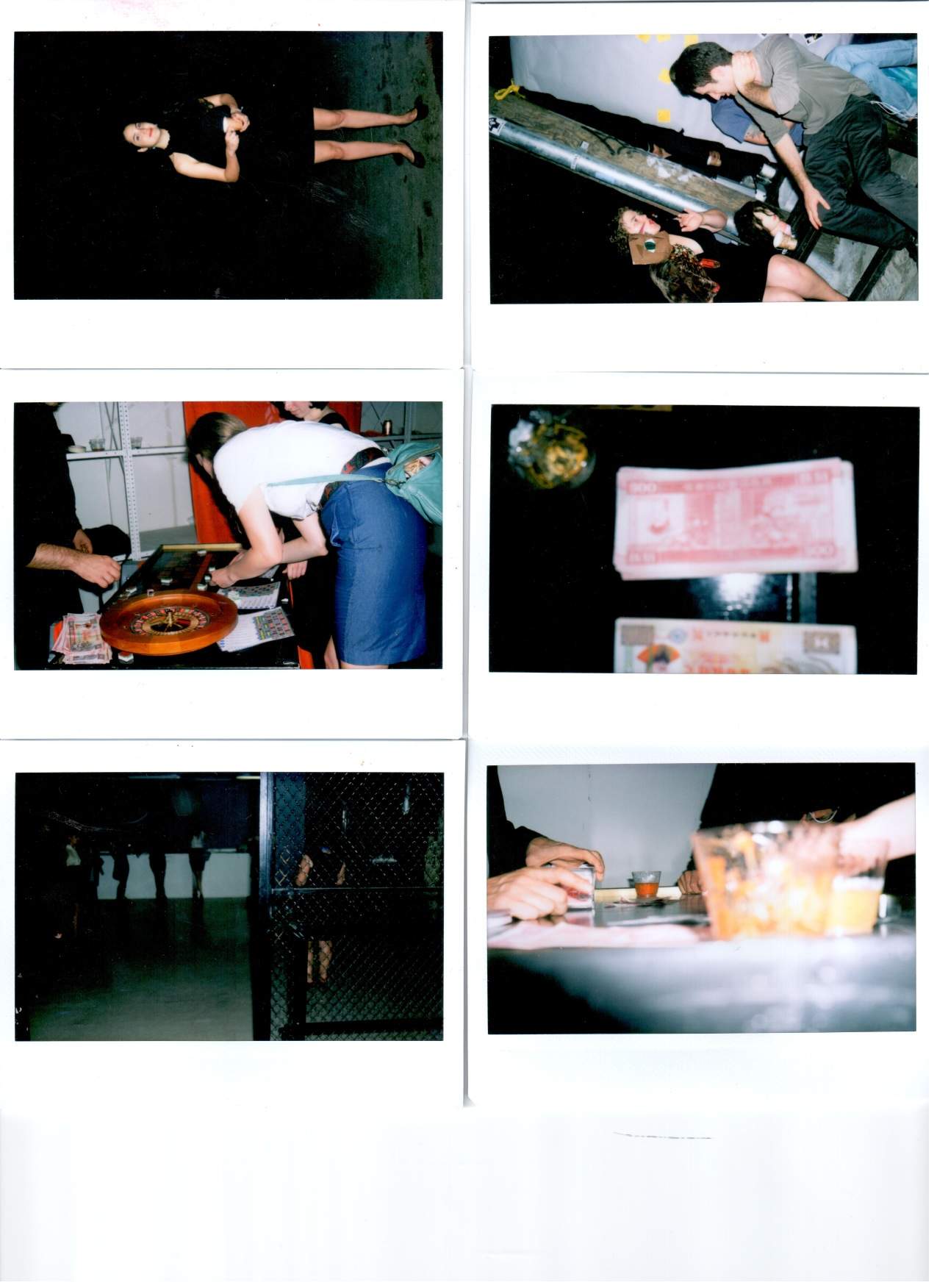 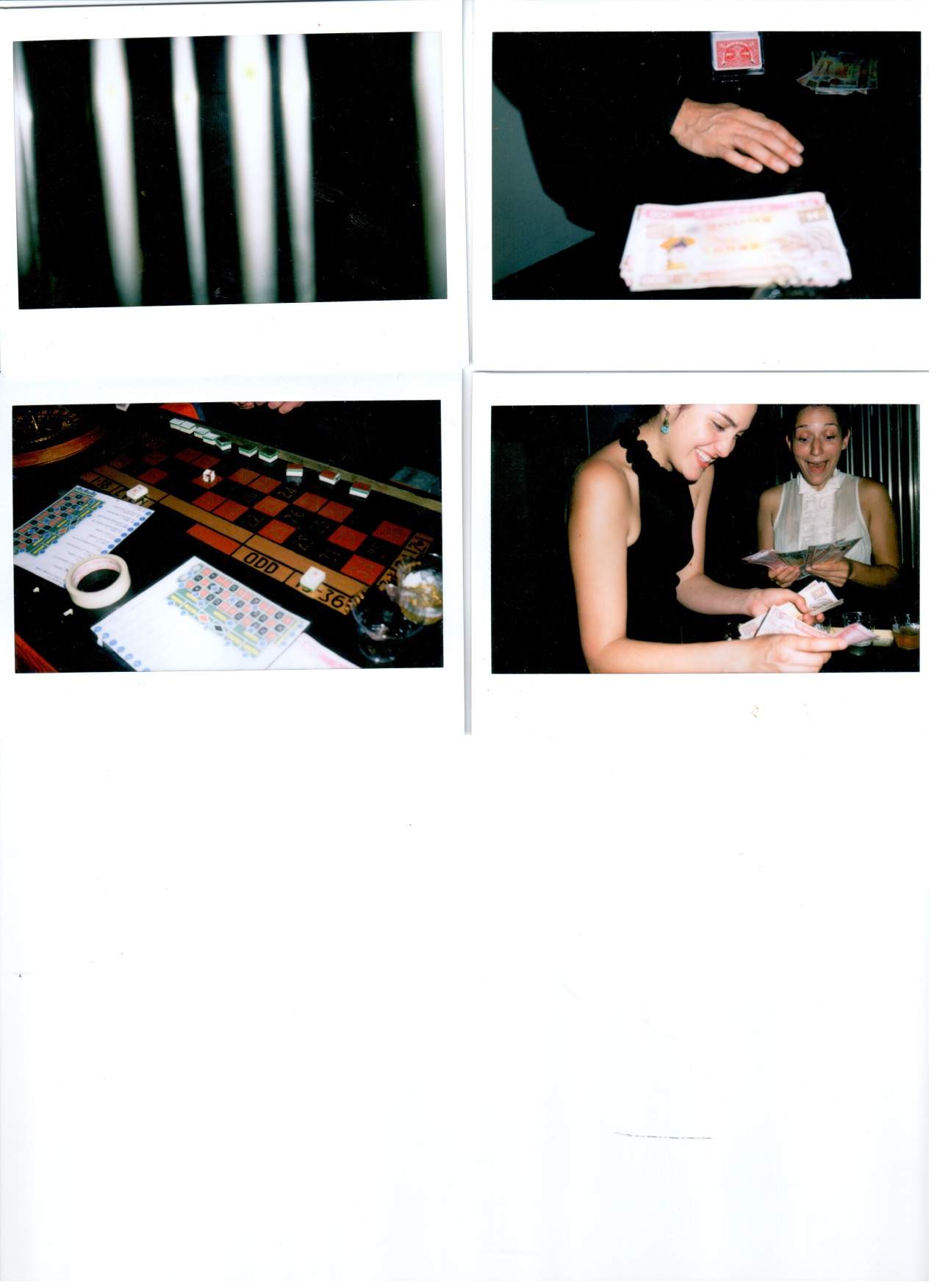 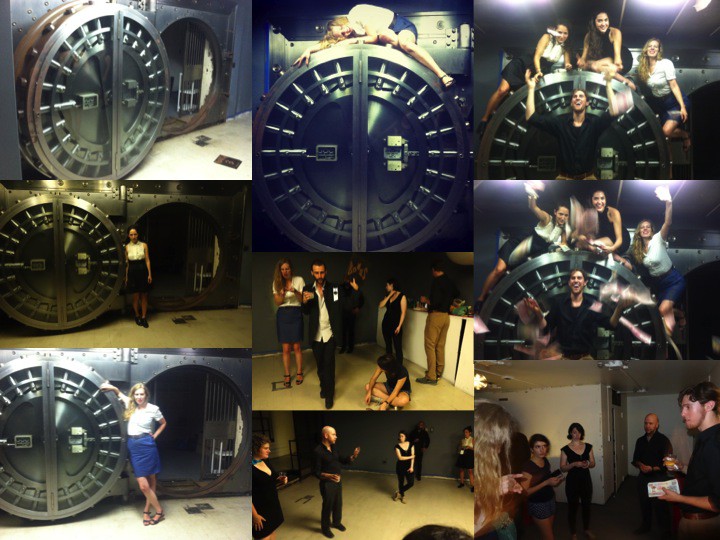 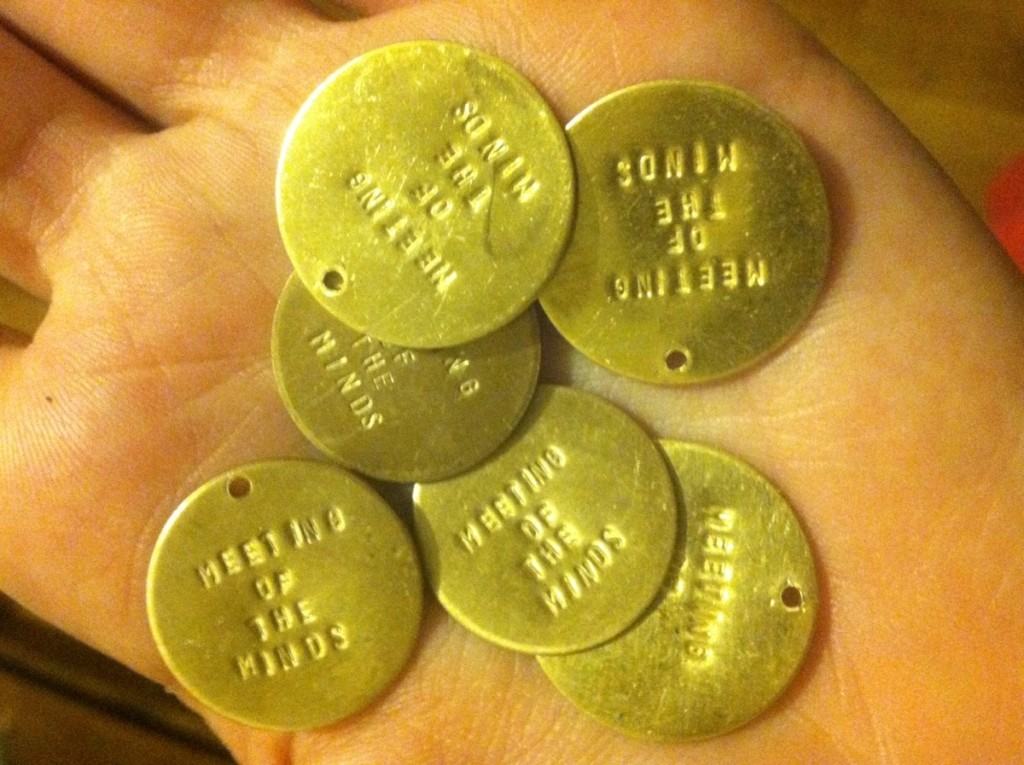 Want to do something like this with me? Let me know.