The problem isn’t uncommon: you may live by yourself or with other folks, but you cook for yourself. There are a couple of strategies for this, but none of them are great:

All of those approaches had their frustrations, so, we decided to try something different: The Mason Project

The Mason Project is a “distributed pot luck” – a way for people who generally cook for one to share food, getting the benefits of making a home cooked meal once a week without the drudgery of having to eat the same thing over and over. 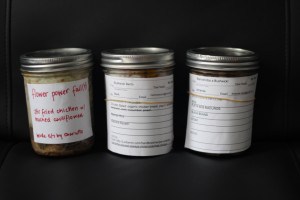 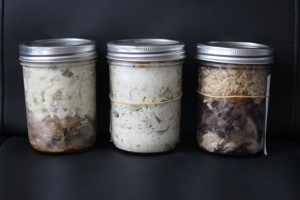 Here’s how it worked for us:

– Gather together a group of people who want to participate. Ideally they are people who live close by (for us, it is a few subway stops in either direction) and can eat the same things you do (for us, this is no food allergies, are happy to eat meat, not too spicy hot, okay with some cilantro cooked into the food and open to trying new stuff).

– Send out a weekly reminder. I usually try to send this out on a Friday, so people can account for it when they are finalizing their weekend plans.

– Over the weekend (usually Sunday for me), make one meal that is big enough for at least 6 portions (I find most “family” packs come in that size). The meal should be healthy (or at least healthy-ish) and have meat, vegetables and some carbohydrate.

– Layer the 6 portions of the meal (I usually put sauces at the bottom, and things like raw vegetables at the top) into 6 wide mouth pint size mason jars, seal them up, and store in a refrigerator. Everyone using the same style of jar means everyone has about the same amount of stuff, and no one needs a container back. Ideally, there is a paper label rubber banded on the jar.

– On Monday evening, there is a meet up. (For us, it has been 8 PM at my house.) Everyone briefly tells the story of what they made. Once everyone knows what is available, everyone is able to trade. You don’t have to take any jars you don’t want. Once the trading is done, everyone gathers their jars and heads off (or sticks around for a little bit and maybe have one of their jars).

And it has been doing wells this since February 2012 (with the occasional seasonal breaks). 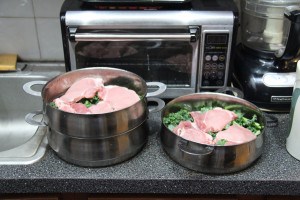 The idea comes from a number of inputs:

– A conversation with Tod Seelie (todseelie.com and suckapants.com) about houses in New Orleans
I was talking with Tod Seelie about New Orleans, and how he knows a bunch of friends who all live near each other on the same street. Each house takes a turn cooking dinner one night a week. As they all have similar work schedules, it works out for them. But in New York, aligning schedules like that is a problem. But the idea of meeting up for one hour with other folks in the hood? Way more likely.

– Innocent Veg Pots
In the UK, there is a company called Innocent, and they mostly make smoothies. But, they also make these things called Veg Pots: sauce on the bottom, carbs on top of that, veggies on top of that. They are yummy! But, I always thought it was an idea I could do something with.

– An auspicious brunch party with Launa Eddy (www.launaeddy.com and launavision.blogspot.com )
Launa Eddy threw a brunch party, and a number of people who lived in the neighborhood were there. I told them about the idea for the Mason Project, and many were in to it. With that critical mass, we set up the first meeting!

So, with through the fusion of different inspirations and some critical mass behind us, things took off and more members were added. 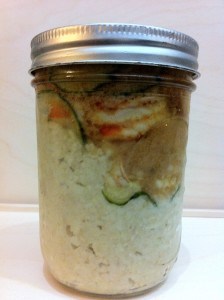 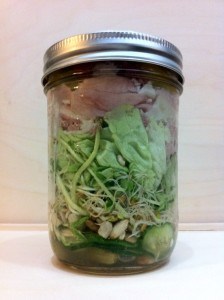 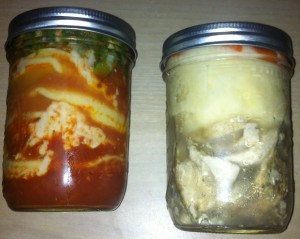 A few reasons it works:

– People have a real need.
Everyone eats. It costs less to eat at home then out, especially if you want to eat healthy, especially if you can cook at scale. If you are only cooking for one though, cooking for scale can lead to eating a lot of the same thing during the week. So, how do you cook for scale without having to eat all of the same thing? Our answer: trade what you make.

– Cost is controlled
As the person making the jars, what you spend is up to you. How much you spend on ingredients and the time you put in to working with them is totally under your control. As the guideline is “healthy-ish” and the exchange is based on perceived value of the jar as a meal, cost and time become less absolute of factors. It comes down to: am I willing to trade what I have for what you have? I’ve found I spend anywhere between $40 to $60 a week on groceries for this, with varying amount of left-overs.

– Quality is controlled
The first way we control quality is to have everyone be a peer. Having people who know each other and are all on equal footing is a great way to make sure people make sure they put their best foot forward in what they are doing. Also, as participants only trade with those they wish to trade, that provides yet another pressure to make sure people will want to try your jar.

– It is sustainable
By keeping the exchange local, allowing people to play to their strengths to meet a real need, and by keeping focused on fairly achievable goals, the project has been able to sustain itself.

– It builds community
When I eat a jar, I feel like every meal comes with a bit of a story, and like I am eating a small present. Having this experience of craftsmanship and care, and through the weekly get togethers, there is a true bond that gets fostered…

A few things we have learned:
– It is better to cook meat all the way through (if you are at work on Wednesday, you may not have a way to heat up a medium rare burger) and undercook veggies just a bit (they get a bit more tender as the week goes on).
– Most people don’t do so great their first week doing the project. But the second week they tend to get it.
– Using fish in your jars is fine, but make sure you call this out so people know. It is advised that fish jars get eaten earlier in the week. (Chicken as well…)
– We take a break in the summer – people are away and there are lot of events to eat out at during the summer.
– This is something that is not for everyone. Some people really don’t like how their choices are limited to what other have offered. Some people don’t like trusting others to cook to their level of quality. Some people just can’t get it together once a week to cook or to meet on the day planned. While it does condense all the cooking time, it still is a chunk of time on the weekend. (Anywhere from 2 to 6 hours, depending on what I am making, including dishes.)
– This is as much about community as it is about food… 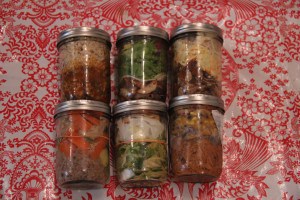 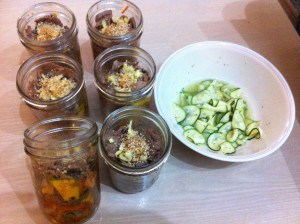 It’s been neat to see what else  has happened because of it. One person who I was freelancing with liked the idea, and started it at the office where we were working. It was great to see how it allowed individuals across the company’s hierarchy to all stand on equal footing, and to see a junior member of the staff suddenly being treated as a peer by a much more senior member of staff.

If you want to be part of The Mason Project, or start your own, let me know! I’d be happy to have you over or help you get started.